Renner travelled 56 hours. Selegna was refused a visa to enter Thailand. International travel can be uncertain and frustrating. But Renner and Selegna and 170 others from 32 countries felt God had called them to join us. So they persevered.

Renner wrote: I’m now at the São Paulo International Airport. I spent 5 hours on a flight to be here. I’ll wait 11 hours before flying to Amsterdam. Another 14 hours later, I land in Amsterdam. I wait 9 hours for my next flight. Then 17 hours later, I arrive in Bangkok. Yep, I really need to be with you, guys!

As I watched the next step in a dream that began in 2005 with the first MinistryNet, my mind filled with David’s question from Psalm 8: 4 “What is man that you are mindful of him?” Overwhelmed by God who is allowing me to see a dream coming true — engaging the power and reach of the internet to help people know him and to grow to be like him.

Our theme “Decisions to Disciples,” focused on new ways to move people forward in their journey to follow Jesus.

One of the unique additions to this MinistryNet was spending two hours each morning in small innovative workgroups. We were seeking to solve a problem or develop an innovative approach to moving people from making a decision, to being a disciple of Jesus. Each group developed a short video to present their proposed solution. The best solutions will receive seed funding to develop a prototype. With MinistryNet less than a week old, three groups are already developing their prototypes.

You can watch many of the MinistryNet 2011 sessions here. [Note: You will need to create a sign-in using TheKey. It’s free.]

Would you like to know more about the diverse projects in internet ministry happening in Campus Crusade for Christ? Visit the MinistryNet Conference Virtual Ministry Fair.

What is your plan to use the opportunities of the internet to deliver the timeless, unchanging message of Christ in fresh, changing ways?

Kay and I ask you to help the helpers. 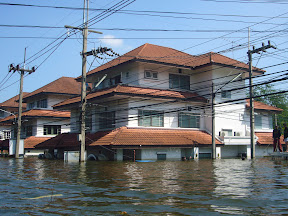 House after house passed by. There were shops with signs like Coffee Today. But no one was serving coffee today in the Coffee Today shop. And no one was living in the houses.

We were floating down a flooded street in northern Bangkok. Our team of volunteers was being towed about 5 miles to a Student Center and church. Thousands of dollars worth of furniture and equipment was submerged in 5 feet of water. If we got them out soon, they could be salvaged and cleaned. Otherwise, they would be rusted junk. 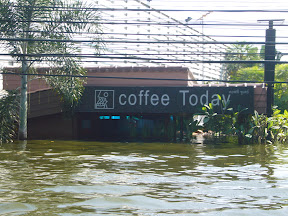 These were the inflatable boats that several MinistryNet conferees had purchased and brought as baggage to Thailand. When we arranged the purchase of the boats, we never imagined that we would get to use them to help with flood relief.

Yesterday, 10 of us took our day of no meetings to join in the flood relief efforts. Kay really wanted to help, but she was needed to help register conferees as they arrived throughout the day. We drove through Bangkok traffic about 2 hours to the far north of Bangkok city, to the place where the flood waters from the north have surged past the levees and flood gates designed to protect Bangkok.

We were part of iServe, the opportunity sponsored by Campus Crusade to serve the people of Bangkok during this crisis time. We served by meeting boatloads of evacuees as they reached dry land. We would help them out of boats. We would carry their loads with them to where taxis and other transport could take them to live with relatives or to evacuation centers.

The evacuees were so kind and appreciative. They were the ones who could only bring a few of their possessions. And they were appreciative of us. 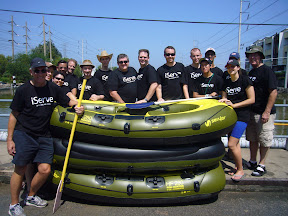 Later in the day, we inflated the boats and climbed in. We were joined by several others who wanted to help. We roped our selves into a caravan of inflatables. Two boats with gasoline engines towed us. For an hour and a half, we passed flooded houses, submerged vehicles, and swamped businesses.

It was a sobering experience. We passed people in creative, homemade “boats”. Pieces of styrofoam lashed together with plywood on top carried several people. Ice chests sealed shut and taped together supported two people. Inner tubes with a plywood deck was piled with personal possessions. Some walked through waist-deep water with a small bag of groceries held high — food to feed their family who was living on the second floor of their flooded house. 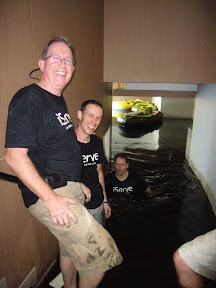 Thailand is known as the land of smiles. This flood has not stopped Thais from smiling. All along the way, Thai’s greeted us with smiles and waves.

We spent several hours carrying furniture through chest-deep water, up stairs, and onto the second floor. The water is not expected to reach the second floor. Since there was not a third floor, we did the best we could.

Tired, wet, and out of time before darkness fell, we journeyed back over an hour to our vehicles. We would be able to go to a nice hotel, take a warm shower, sleep in a comfortable bed and wake up to a MinistryNet conference . The Thais we met would try to find a place to sleep and wake up tomorrow to begin again trying to find a way to make life work for them in the midst of this flood. 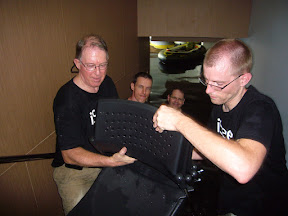 My prayer was that the God of all mercy and compassion would flood Thailand with his mercy. I prayed that God would make known his name among this nation. I was glad that we were able to have a very small part in providing inflatable boats, in helping people carry their loads, and helping one of only 4,000 churches in this country save some of their furniture. As I stacked soaked chairs, I prayed for those who would sit in the chairs in the coming months.